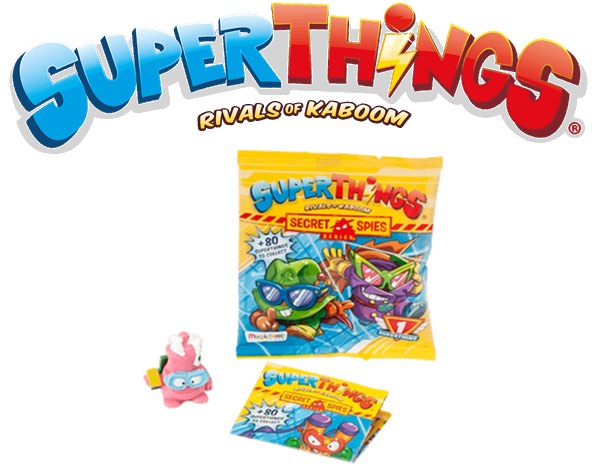 These small rubbery collectables have already succeeded in other European countries such as Germany or Spain and they are now available in the UK. You will find them in stores such as Sainsbury’s, Tesco and Argos.

Superzings or SuperThings (their official name) are a series of collectables aimed at children aged 4-8 created by Magic Box.

They are brightly coloured rubbery toys that split into teams of superheroes and supervillains. SuperThings are mini superheroes and villains that fight each other and live in the city of Kaboom. These toys come with accessories such as hideouts, spy jets, aero wagons and sky racers.

➡️ How much do SuperThings cost?

The basic pack contains one SuperThings and a checklist of the 80+ characters to collect and cost just 80p.

You can also buy them on a £5 mega pack that contains four SuperThings and one hideout. In addition, you will find blister packs and starter packs for a higher price as well as their vehicles and accessories.

Where do SuperThings come from?

Magic Box is the company that created SuperThings. The colourful, cartoon-character superheroes are their new creation after their popular Zomlings.

SuperThings have followed the same successful formula as their older brothers Zoomlings. These popular collectables came in individual packets or blisters that you could buy to collect the +100 characters each Series contain.

Same as with SuperThings there were rare characters including gold and silver little monsters to collect and swap. The kids really had fun collecting them and playing games building a Zoomling town.

Zoomlings came from the future and rose from the ground to fly across the skies in their zoom mobiles. These creepy little collectable creatures had their own episodes on youtube under the name of ‘Zoomlings in the Town’ that told little stories of their characters. You can watch the first episode here:

Opposite to Zomlings, SuperThings are not monsters but brightly coloured objects such as a walkie talkie named ‘Walkie Hush’ or a key named ‘Keytective’.

They are either heroes or villains and live all in the City of Kaboom. They also have a wider range of accessories and vehicles. Instead of zom-mobiles SuperThings ride spyjets and megajets and instead of buses they have aerowagons.

SuperThings are divided into Series of characters that are grouped into teams. All teams have their captains and are led by super rare SuperThings characters. So far there are five SuperThings Series available and the last SuperThings Secret Spies Series which some people also called Series 6.

💥 The popularly known as Series 7 or Secret Spies is about to come. We tell you everything about SuperThings Series 7 here.

These cartoon-character superheroes really appeal to children and they still play with their SuperThings from series 1. This is their history.

A year later, we could enjoy SuperThings Series 3. A new series of fun collectable fighters that brought new vehicles and the new Superbot. A giant and powerful robot with special attacks that destroy everything around them.
The new teams of this Series were:
Team Invincible
Sneaky Crew
Amazing Troopers
Thunder Clan
Brave Patrol
Danger Squad

Although some called it Series 6, Magic Box actually renamed the series to SuperThings Secret Spies.
The new characters of this series changed their colour when you put then in warm water and their eyes are revealed. If their eyes are white, they are heroes, if they are yellow, they are villains.
The Ultra Rare character of SuperThings Secret Spies became the most famous character of the series. Oculus Max is capable of changes sides at will. Nobody knows if it’s a hero or a villain.
The teams of this last series are:
Trickster Troop
Flashy Faction
Dark Division
Action Squad
Downtown Bandits
Protectors Pack
Spies

We still don’t know when the new SuperThings Series is going to come out. What we are sure of is that there will be new characters, vehicles and a new Ultra Rare.
We are keeping an eye on all the rumours and news we see on the Internet and the official website and we will keep you update as soon as we have any news.

➡️ Where can I find SuperThings TV episodes?

In 2018, when SuperThings Series 1 was launched, Magic Box also put their cartoon TV episodes on the Internet. They tell all the stories that happen in Kaboon City. You can find them all in Magic Box official Youtube Channel.

Here is the first episode.

After releasing the new SuperThings Secret Spies Series, new episodes came out. These are new cartoon tv episodes for kids. So far there are a total of 8 episodes.

Although many parents are confused by the English name, Magic Box, the creators of the SuperThings are a Catalan company, from Barcelona, with a long history of selling collectables.

One of these things does not belong! Can you guess which SuperThing shouldn’t be here?

They are now experts in creating collections of 3D figures. Although they are made in China Magic Box design the characters and the story around them.

The children love the story of these figures based on everyday objects. You can find a pineapple, a pepper or a piece of sushi fighting each other.

When the first edition was released it took a few months for people to notice them but they have not stopped growing since then.

The social networks worked as amplifiers for them.

In addition to the cheap figures, they have created a range of toys around Superthings that have been sold out every Christmas. SuperThings have all sort of products such as backpacks, board games and albums which made them leaders in the toy shop category.

The most wanted ultra-rare characters

Any of the ultra-rare characters, being the ones with the least presence, have an important market in the second hand.

Some users sell gold figures, for an average of 10-15 pounds, and the ‘most wanted’ reach 40 pounds, a surcharge of 5,600% over its original price.

This is due to a large number of adult collectors who like these little creatures. There are many adults who are determined to complete the collection. Those who buy and sell for these prices are not families, but adults who are dedicated to collecting, and have a secondary market.

Send us your SuperThings drawings!

SuperThings are the coolest new toys for boys and girls in the UK. These little superheroes and villains have created a whole new universe of fun for children in the city of Kaboom. If you also love them, send us your drawings and pictures and we will publish them here.