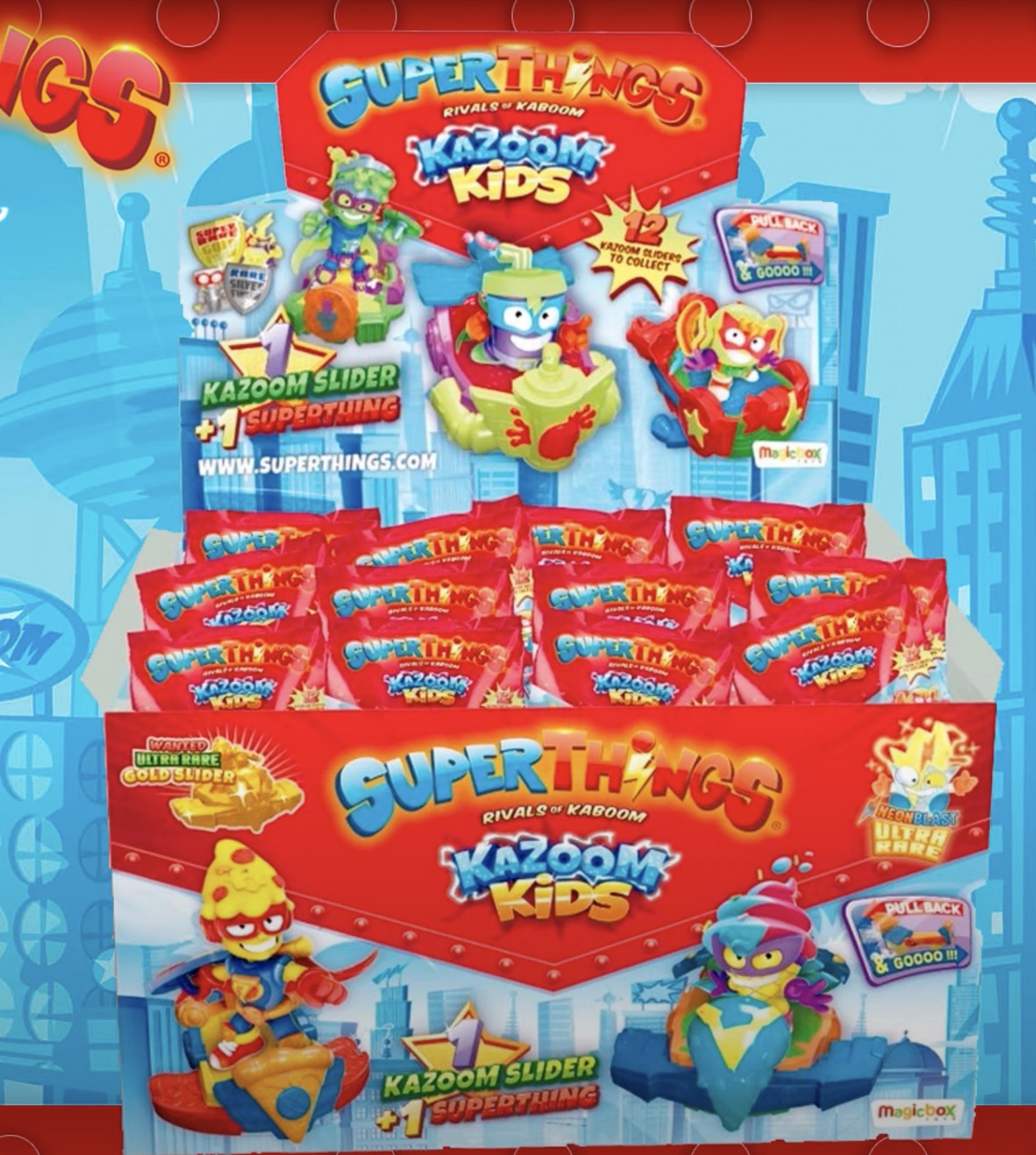 We believe the name for the new SuperThings series will be SuperThings Kazzom Kids although some people will simply call it SuperThings Series 8.

When will the SuperThings Series 8 Kazzom Kids series come out?

🚀 If everything goes the same as in the last releases SuperThings Kazoom Kids will be launched on August 2021. There are already rumours about the new products. Let’s hope that this year they will be ahead of schedule and arrive before Christmas.

Every year Magic Box brings out its new collection for the end of January. If the tradition continues, the new Series 8 will be with us before the end of January next year. We already know its name and the surprises it brings.

The new collection will be named Kazzom Kids. If we follow the original numbering, it will be the seventh SuperThings series Magic Box releases. New 80 characters will be launched plus a new Ultra Rare character.

Once again we will have the opportunity to collect new SuperThings vehicles. These are the Slider.

Each packet contains a SuperThing and a special vehicle. There are 12 different ones to add to your collection.

✅ Each Slider has a different special attack.

If you buy this new blister, this is what you will find:

For those starting the collection the best thing to do is to buy this magazine. It contains the following:

When does SuperThings Series 8 come out?

🚀 The date everybody is talking about is August 2021

We will keep an eye on the news in order to better specify the release date of the 8 series.

Will the new Kazoom Kids become the Series 8?

This new seventh SuperThings series does not continue the previous Kazoom Kids Saga. Magic Box have decided this is the begin of a new saga of powerful Kids, with new vehicles and robots.

We will continue to keep an eye on the news in order to better specify the launch date of the 8 series.

We don’t know how long they will continue to release the Kazoom Kids Series, but everything points to it lasting a while.

MagicBox never cease to amaze us every time they bring out a new series. This time they bring us the the first Big Kids, and the Ultra Rare NEONBLAST ⚡ But there is more:

Is Doctor Volt a Hero or a Villain?

Some say he is here to come up with good ideas and fight on the right side. Others say his will light up when he is ready to attack and destroy everything as a villain.

We will see which side he is on very soon!

Psst! We have a clue for you. Doctor Volt has a big “H” in his glasses.

Everybody on the Internet is asking the same question but we still don’t know much about this new Ultra Rare Character. We believe the new Youtube stories will help us answering this question.

This new Series is about Kids. Will the NeonBlast be powerful enough to fight DoctorVolt? Is he able to create a machine to beat it? We’ll see!

How many SuperThings will come out in the 8 Series (Kazoom Kids)?

Where to buy the New SuperThings Kazoom Kids in the UK?

Although we still do not have official confirmation from the big retailers we are sure you will be able to buy the SuperThings Kazoom Kids in your usual shops.

As always the best offers and product range is always at Amazon. Take advantage of August Amazon’s cheap prices and their quick delivery service.

Amazon always guarantee you product quality and excellence in delivery. If you are an Amazon Prime member, SuperThings Kazoom Kids will arrive at your door within 24 hours.