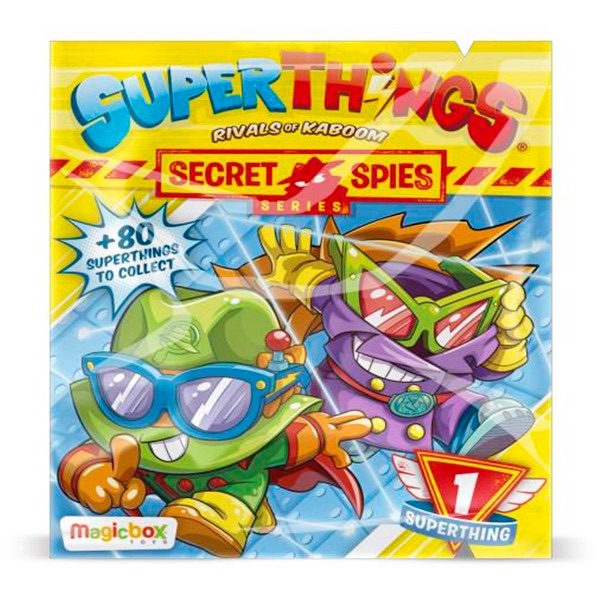 You can buy now the new Series 6 SuperThings.

The new envelopes in this Special SuperThings Secret Spies Series. You have more than 80 new characters. If you buy a box, 50 envelopes will come along.

Find out how they change colour. The box comes with 1 spy detector, a hideout and four SuperThings (one of them is an ultra-rare one).

We heard that there are 2 surprises, a new character and the secret hideout.

These new vehicles seem harmless but the truth is they all hide secret weapons inside. There are 4 different new vehicles. Each one has two versions, so in total there will be 8 different ones for collection.

Buy this special blister pack with 10 SuperThings, one of which will always be gold. You can see them in the video below.

The best way to start this new Spies collection is to buy the comic. You also have the detector gift, 3 SuperThings and some real spy glasses.

SuperThings Headquarters with exclusive vehicle, Mr King exclusive figure and 2 SuperThings. Lift the vehicle cabin to the control centre and operate the lever to slide it back.

A new Kazoom Racer Vehicle that comes out with this Series. It comes with an exclusive Kid Kazoom figure, you can put the vehicle in flying mode or normal battle mode.

A new Fury Speed Vehicle that comes with this series. It comes with an exclusive Kid Fury figure. You can put the vehicle in flying mode or normal battle mode.

This novelty is a special can containing 5 superheroes that make up the Speed Patrol team. You can collect it together with the other cans you already have.

A band that you can wear on your wrist. With the Power Band Watch, you can play with 4 different characters. It activates 3 sounds per character.

A new special series of the ‘SuperZings’. But now they are called by another name. We will find out why they have changed their name.

The news we have is that the Secret Spies series comes out in theory on August 21st. You can buy them now so that they arrive at your house the earliest.

You can already buy Secret Spies Series 6 at AliExpress

You can already get the Secret Spies Series 6 at AliExpress

MAGIC BOX had SuperThings as a registered trademark and it now looks like the Series they planned to release are not coming out. In exchange, they offer us this new collection with a different name: Secret Spies.

The SuperThings are now secret spies! They can be heroes and then turned into villains. MagicBox want to surprise us with this new launch, with a new name and loads of hours of fun!

✅ When does SuperThings Secret Spies Series come out?

As they have already been advertised, we think the new Series can be brought forward to July.

👏👏👏👏 These images have been sent by Tom. Thanks a lot Tom for your contribution!

The new vehicle of one of our favourite characters!

These new vehicles seem harmless, but they all hide secret weapons inside. They will surprise your enemies!

As far as we can see in the images, the spy characters change colour with temperature, We’re sure that if you put them in cold or hot water you’ll have fun watching their eyes light up.

The new ultra-rare included in each series could not be missing. In this case it will be this mysterious character.

This character is known by all the fans, but he has the particularity that nobody has been able to see his face, so he will be the the great surprise of this new series.

He is a hero and a villain at the same time. The ultra rare is MAX, MR’s personal assistant. KING, an enigmatic and secret character known by all the fans. He has never been seen in any comic book or series…

You can find new hideouts in this new SuperThings Spies collection..

Images sent by a fan:

As announced, 8 new hideouts will be included in this Series for you to store your new characters.

Like other times, the fun thing is that you can make fun constructions with the hideouts, build buildings, forts, walls, any kind of fun building, since you can put them on top of each other.

Meet all the characters in this video.